We are often asked at Farrington’s what is meant by the term ‘cold pressed’ in Farrington’s Mellow Yellow cold pressed rapeseed oil? A good question that does need some explaining.

Extracting oil from seeds and fruits such as rapeseed and olives is one of the world’s oldest forms of food processing. This along with grinding seeds into flour from wheat or making alcohol from barley for beer, or grapes for wine. The traditional method to extract oil is by mechanical ‘cold pressing’. If you have enjoyed a Mediterranean holiday, you may have seen an old big wooden olive oil press in the middle of a village square. Fresh olives would be poured into the press, a donkey would walk in a continual circle and the press would squeeze the fruit until the oil came trickling out.

In Britain we don’t grow olive trees, but we do grow rapeseed and have done since the Romans first brought it here over 2000 years ago. No doubt they would have used something similar to the donkey driven press to extract oil from the seed. However, for the last hundred plus years, oil has been extracted from seeds in Britain mainly by the industrialised method known as the ‘pre-press solvent extraction process’. This was developed as a highly efficient system of extracting oil, using high temperatures around 85°C, with the addition of a solvent (think of nail varnish remover or paint thinners), following which the oil is degummed, neutralised, dried, bleached and deodorised. Although this is a complicated process, it is a highly efficient way to extract large volumes of refined oil cheaply, with the resulting bland, colourless oil being ideal for many food manufacturing processes, as it does not flavour or colour the foods being made.

Many oils are produced in this way the world over, including olive oil, sunflower oil, groundnut oil, corn oil, rice bran oil, as well as rapeseed oil.

It wasn’t until the advent of package holidays in the 1970’s, that we started to become aware of more exotic types of culinary oil and other exotic foods. This resulted in British food starting to get a bit more colourful and a little less bland. By the time I launched Farrington’s Mellow Yellow in 2005 as Britain’s first ‘seed-to-bottle’ cold pressed rapeseed oil, people were happy to give cold pressed rapeseed oil a go. 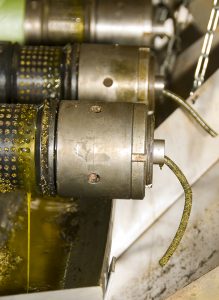 Firstly, cold pressed is just that, we simply squeeze the seeds mechanically to extract the pure oil, without any additional heat being used, then pass the oil through filters a bit like a large tea strainer to remove any sediment. This means that the process is slow and inefficient compared to the refined process, so less oil is extracted from the seed. As a comparison, our cold pressed rapeseed oil leaves around 12% oil in the seed, whereas the industrialised method will only leave around 1%. However, nothing is wasted. Once the seed has been pressed, the leftover seed husks are shaped into rape meal pellets and given to farm animals as nutritious feed.

Additionally, cold pressed oils retain their natural character as nature intended. The most obvious being a superior taste and appearance compared to a refined oil. Cold-pressed rapeseed oil has a mild taste with subtle nutty or seedy flavours. Farrington’s Mellow Yellow, for example, has flavours of raw groundnuts, hazelnuts or sunflower seeds, whilst this flavour is underpinned by buttery undertones. Some people can taste the buttery flavour and not the nutty one. Mellow Yellow is also clean and light on the tongue, with no bitter aftertaste. These subtle or mellow flavours make it ideal to be used as a salad dressing oil, allowing the ingredients it is mixed with to come through, giving a different character to a dressing made with an olive oil, for example. Whilst the same mellow flavour makes the oil ideal for all types of cooking from baking breads and cakes, to seafood recipes and, also for roasting and stir-frying vegetables.

Rapeseed oil is naturally yellow in colour hence the name ‘Mellow Yellow.’ This is down to the presence of carotenoids. Carotenoids play important roles in the prevention of various types of cancers, heart disease and eye health. People are increasingly looking for benefits from natural sources of carotenoids found in several unprocessed foods. Cold pressed rapeseed oil mainly consists of a carotenoid group called luteins, important for healthy eye function. This is almost completely removed in refined oils.

Plant sterols are another health promoting micronutrient found in cold pressed rapeseed oil, shown to help lower cholesterol levels. Although the sterol levels in rapeseed oil are too low to make official health claims, it is an excellent source compared to other oils. Again, however many of these important micronutrients are lost in refined oils.

Whether it is the delicious taste, the wonderful colour, the knowledge that you are enjoying pure, unadulterated food with its naturally healthy properties, or just the fact that a cold pressed oil reminds you of holidaying in Greece, there are no end of reasons to use Mellow Yellow cold pressed rapeseed oil. There is a genuine difference in the provenance of cold pressed oils compared to their bland and less exciting refined versions. And, research shows that consuming cold-pressed unrefined rapeseed oil is an important part of a healthy diet and lifestyle.

“Salads are good for us.”   Everyone agrees with this statement as we are encourage...

What is the healthiest oil to cook with?

Cooking oils are a type of fat. Fat is a macronutrient (like protein and carbohydrate) that is made ...

What are fats and what are the differences?

Duncan Farrington takes a closer look at what are fats, the different types of fats and clears up so...