Why we no longer plough our fields…

As a farmer, I have always known that everything I produce is dependent on the soil I grow my crops in and the rain that falls on them. Without these natural resources, we would fail. However, it is not just farmers that soils are important to. They are the cornerstone for the survival of life on earth and, as former American President Roosevelt appreciated, the key to the prosperity of whole nations and civilizations.

Ever since mankind turned from hunter gatherer to farmer, we have had the sad record of destroying our soils, which led to the demise of empires. Whether this being the Ancient Greeks, where ancient monuments are now surrounded by arid bedrock, in what was once fertile farm land. Or the fall of the Roman Empire, which spread out north and south from Italy, in the attempt to bring food in from new agricultural lands. Or more recently the fall of the Soviet Union, as the population got fed up with constantly queuing for essential staple foods, where in reality they were not producing enough food to feed themselves.

In nature crops and animals grow naturally quite well, but they are a bit randomly spread out. As mankind started to domesticate crops and animals for their needs, they started clearing areas of land to produce more food in a given area. The land was cultivated by the plough, originally a small implement pulled by an ox or donkey, today it is much larger and pulled by tractors. But the principle is the same. The plough turns over and breaks up the soil surface to create a seed bed to plant crops in. The advantages are that it provides soils free from weeds, provides good conditions and soil structure for plants to grow in. It also gives a nutritional boost to the plants as bacteria breakdown minerals for the plants to feed off.

Over time the disadvantages of ploughing however outweigh the advantages. The freshly disturbed surface of the earth is very fragile, especially when it rains, with soil erosion being particularly noticeable on slopes. As rain drops hit the soil surface, water drains down-hill into streams, rivers and eventually into seas and oceans. But the water takes the fertile soil particles with them, which in time can remove the soil completely; think of those ancient Greek monuments standing on top of rocky outcrops. But it still happens today as this satellite image of the UK clearly shows. Now whilst I am all for us exporting more products to our friends in Europe, I am not sure we want to be sending them our fertile soil. 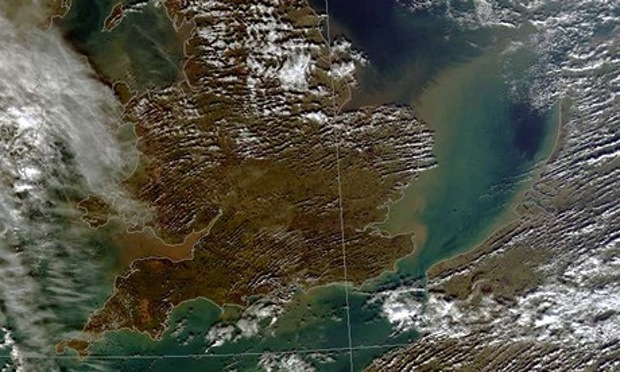 This satellite image, taken on 16 February 2014, shows how soil is washed off our fields and out into the sea. ©NEODAAS/University of Dundee

Also, whilst ploughing creates a lovely loose structure for seeds to germinate in, the action of ploughing exposes the soil to oxygen in the atmosphere. This gets all the soil bacteria really excited, similar to a young child being given sugary sweets, running around really quickly, before collapsing in a heap on the floor once the sugar rush is over. The bacteria ‘run around’ in this high oxygen atmosphere, giving lots of nutrition to the crop, but it is short lived as the bacteria eat up the store of carbon in the soil, respiring as they do so, and thus release the stored carbon to the atmosphere as carbon dioxide. This has the double negative effect, of gradually reducing the nutritional content of the soil and increasing the global warming effects of increased CO2 in the atmosphere.

Having learnt much on soil quality over the years, I took the decision not to plough on our farm back in 1998. Admittedly, my incentive was not just to save the planet, but also to save money as ploughing is an expensive operation. Although it was known my crop yields could reduce a little, hopefully this would be more than compensated by reduced costs. When I stopped ploughing, I made lots of mistakes as yields reduced dramatically for a short period, as well as weed pressure increasing. Our neighbours thought I was a bit daft – they may be right on that one. But over the years, I have learnt an awful lot as the system has improved. The theory of not ploughing is that naturally plant roots and creatures like worms improve soil structure. The bacteria and other micro fauna improve the soil health and biology, converting old plant residues and mineral content of the soil into plant food. So by not ploughing, the soil structure and organic matter content gradually improves year on year and, the carbon from the soil is not released to the atmosphere as CO2. I continue to learn from my experiences as we are making a healthy environment for the plants to grow in, but this is the underlying theory. 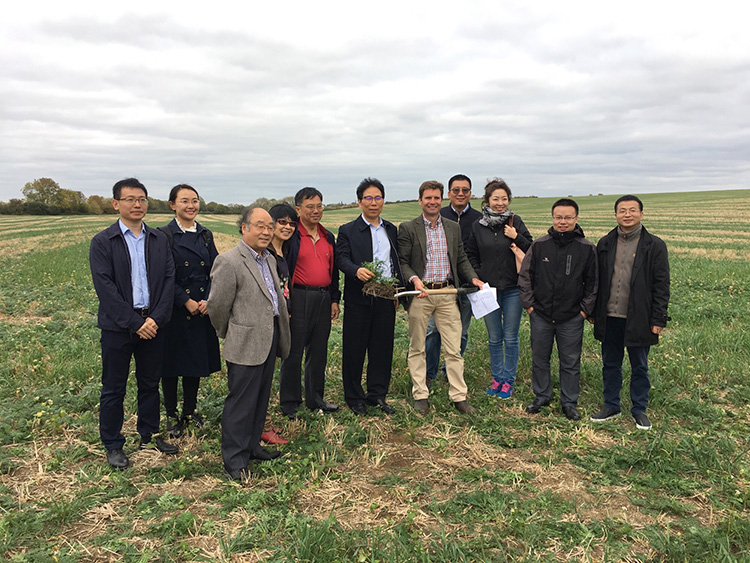 Delegation from China, including Deputy Director General of the Ministry of Agriculture and the Chinese delegate for the United Nations Environment team.

Today, soil health is something that governments around the world are realising is important and we should be doing something to improve our most important natural asset. I was especially proud recently when, along with LEAF, I hosted a delegation from China which included; The Deputy Director General of the Ministry of Agriculture and the Chinese delegate for the United Nations Environment team. They were very interested in what we are achieving with our soil health on the farm.

Plenty of commentators accuse agriculture of being a huge cause of global warming from CO2 emissions, however I can show from what we are doing on our farm, agriculture can play a major role in reducing CO2 emissions when looking after our soils. 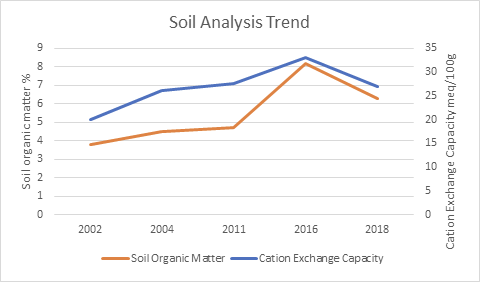 The
graph shows how the soil on our fields is improving in quality, by increasing in soil organic matter. To put this another way, we are actively absorbing CO2 out of the atmosphere and locking it into our soils. If this is repeated around the world, the benefits could be enormous; it has been estimated that agriculture could reduce global CO2 emissions by between 10% to potentially 30%. The graph also shows the increase in Cation Exchange Capacity (C.E.C). In basic terms as the CEC increases, there is more nutrition within the soil for the plants to grow healthily.

So, in the space of a few years of trying to work with nature, the results clearly show we are creating a healthier, more nutritious environment for crops to grow in. Not only is this good for the soil and the wider environment, but it is good for us also, as healthy soils grow healthy crops and healthy crops create healthy food for us to enjoy eating.

Learn more about our environmental credentials here and where to buy our LEAF Marque Cold Pressed Rapeseed Oil here.