On the 8th August, we took part in 24 Hours in Farming, the agricultural industry’s biggest online event, which highlights the pride of the nation’s food producers and encourages farmers to show the general public a typical working day through the power of social media using the hashtag #Farm24. Starting at 5am on Thursday 8th and finishing at 5am on Friday 9th, this 24 hour event encouraged British farmers to share an insight into their day to show consumers the effort and care that goes into producing their food. 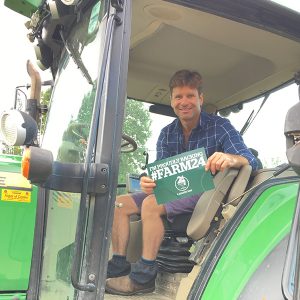 Starting first thing in the morning, Duncan had to move all the barley in the barn back as far as possible, to give plenty of room for the barley he was due to the harvest throughout the day. 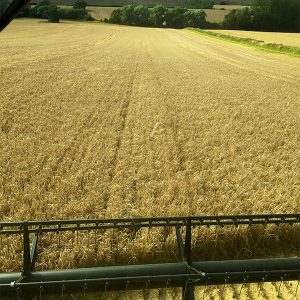 View from inside the combine harvester

Meanwhile, Robert (Duncan’s father) and Marvin (our farm worker) started preparing the combine harvester. This involved cleaning the windscreen, blowing the dust from the combine to reduce fire risk, setting up the GPS and getting the combine ready for a busy day. Once everything was set, Marvin starting combining. We use GPS to pinpoint our location in the field and steer the combine through the field, ensuring that each length of the field is harvested as efficiently as possible, reducing fuel usage and taking less time.

We were harvesting spring barley on this particular day. This year our spring barley was destined to be made into malt for beer, so a fairly important crop in our opinion! 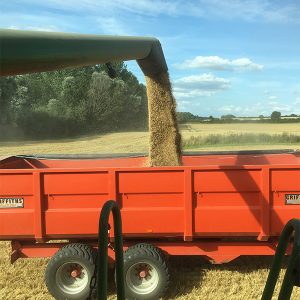 Barley being unloaded into the trailer

Whilst Marvin drove the combine, Duncan and Robert took it in turns to fill a trailer load of harvested barley from the combine and take it back to the farm yard and tip it into the barn. By having both Duncan and Robert do this, they were able to keep up with the speed Marvin was harvesting at so the combine didn’t have to stop at any point. 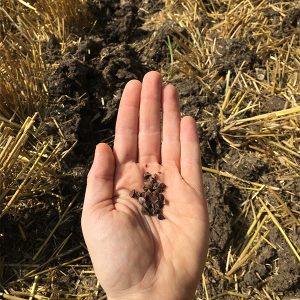 We visited another field on Bottom Farm, this one was harvested a few days previously and then planted with cover crops. We use cover crops to improve the health of our soil, but the key benefit is the fact that they absorb CO2 from the atmosphere and store the carbon in the soil (more info here). We planted buckwheat (the bigger, pyramid shaped seeds) which scavenge for phosphate and helps young plants’ root development. We also planted phacelia (the tiny seeds) which have fibrous roots for soil structure. On the same day as #Farm24, the UN also released their latest climate change report, which highlighted the importance of soil and storing carbon from the atmosphere in soil, which is exactly what our cover crops do!

Whilst Duncan was busy with harvest, his wife Eli jumped in a tractor and rolled the fields of cover crops. Rolling smooths the field and ensures the seeds are pushed into a good soil base to give them the best chance for growing. 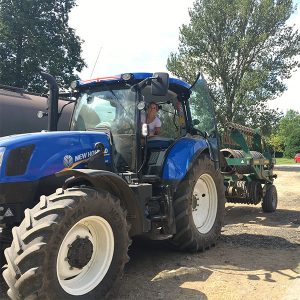 Next, we headed over to the Mellow Yellow production barn. Mellow Yellow Rapeseed Oil is grown, pressed and bottled on the farm. First of all, the seeds go into big yellow hoppers which feeds the seed into the presses. The seed is then cold pressed which involves being gently squeezed until the yellow oil is released. The seed husk is not wasted, it is shaped into pellets and sold to local farmers as high quality animal feed for cattle, pigs and sheep. 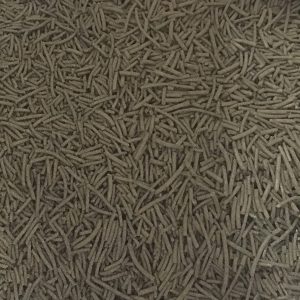 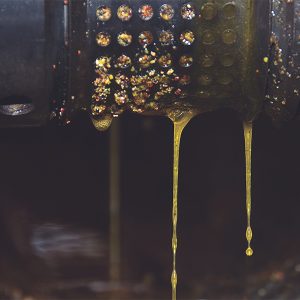 Once the seed has been pressed, the oil trickles out and is simply passed through a filter, a bit like coffee paper, before it is put into bottles. These bottles were then destined for Morrisons, the sponsors of 24 Hours in Farming, a lovely coincidence!

Returning back to the combine harvester, Duncan, Robert and Marvin had lots of barley to harvest, so ended up going until half 10 that night, it’s a good thing the combine has headlights! By the end of the day, we had managed to harvest all the barley, which we were VERY pleased with, especially as rain started to fall the minute after we had shut the combine into the barn, perfect timing or what! The weather often causes problems around harvest, the crops may be ready but if it’s raining, we can’t combine as the moisture levels must be low. 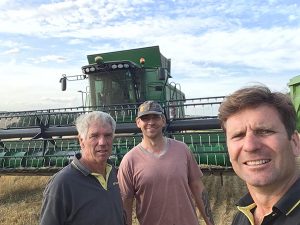 Duncan, Robert and Marvin after a busy day’s harvesting

Throughout the day, hundreds and thousands of British farmers and food producers shared images and videos from their day with #Farm24. It was a fantastic day for learning about how our food is produced. #Farm24 was trending for most of the day and over 8 million people saw the photos and videos shared throughout the day! For more information on 24 Hours in Farming, please visit Farmer’s Guardian here: https://www.fginsight.com/24hoursinfarming/sponsored—24hoursinfarming

Bottom Farm is an arable farm, in other words, we grow crops and not animals. However, when giving t...