Soil health is a big part of sustainable farming and I have been measuring this on one of my fields since 2002. Among the great soil nutrition and health improvements seen in this field due to my sustainable farming practices, I have farmed in a way that has increased soil organic matter (SOM) which has a direct impact on reducing atmospheric CO2 levels. Between 2002 and 2020 I have seen my SOM increase from 3.8% to 6.7% which is a significant amount when talking about soil!

What is Soil Organic Matter?

Soil organic matter is the organic part of soils consisting of plant and animal detritus at various stages of decomposition. Think of dead leaves off trees, straw left behind after crops have been harvested, decaying soil microbes and insects, or old plant roots in the soil.

The organic matter is made up of cells and molecules containing lots of carbon and it can be lost from soils over the years through natural processes, which is sped up if soils are moved intensively, mixing with oxygen in the atmosphere and released as carbon dioxide (CO2). Commonly this occurs when a field is ploughed.

We no longer plough our fields and have worked hard on our sustainable farming methods to keep the carbon in the soil. In the right conditions SOM can be increased over the years, as plants grow, taking carbon dioxide out of the atmosphere to create plant material through the natural process of photosynthesis. The process of taking CO2 out of the atmosphere and storing in the soil is called carbon sequestration and the soil becomes a carbon sink as it reduces the levels of CO2 in the atmosphere.

Soils have the ability to be fantastic carbon sinks when looked after. In fact, coal and mineral oils that are mined from the ground (fossil fuels) are carbon that has been stored from hundreds of millions of years ago, formed from decayed plants and animals that once grew and roamed the earth.

How does this relate to our farm?

On my field called ‘Below the Black Barn’ the increase in soil organic matter has removed CO2 from the atmosphere, locking it in the ground which is great for reducing global warming as well as making the soil more nutritious for the plants to grow in. The figures are very impressive. We know that for every 0.1% increase in SOM, around 8.9 tonnes of CO2 are sequestered on every hectare of land.

But what does this actually mean?

If my field has increased the total SOM by 2.9% over 18 years, it has absorbed around 258 tonnes of CO2 per hectare (ha), or 14.34 tonnes per ha per year on average. One hectare is around the same size as one and a quarter football pitches.

To put this into context, driving a 1.5lt petrol Mini (our Mellow Yellow Mini) car produces 117g of CO2 per Km. So, for every hectare of our field we are absorbing enough CO2 to off-set nearly 122,554km of motoring, which is equivalent to over 10 years driving for the average motorist!

Let’s look at the whole farm…

This is just off one hectare, but Below the Black Barn Field has a cropped area of around 20ha and our whole farm cropped area is around 272ha. Therefore, from the way we farm our soils, we are sequestering an impressive 3900 tonnes of CO2 per year, off-setting enough CO2 to fly one person 500 times around the world in economy class! (or take 2,778 cars off the road) each year. 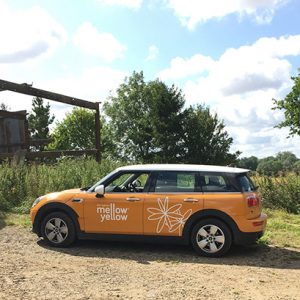 The story does not end with the cropped area

We have a medium sized family farm, which not only includes the cropped area, but all the other bits we do around the edges of our fields as part of our LEAF farming and sustainable farming practises. These include areas of woodland and hedges, a grass meadow, areas of native wild-flowers and grass margins. Over the years we have planted well over 8,000 metres of new hedges and over 8,000 native trees on the farm to add to the existing trees and hedges. All these conservation areas can be calculated to sequester a further 240 tonnes of CO2 per year, as well as being areas for wildlife to thrive and prosper.

In summary on our medium sized family farm in Northamptonshire, following our LEAF and sustainable farming principles of a common-sense approach to sustainable agriculture and soil management, we are absorbing over 4,100 tonnes of CO2 per year, which is equivalent to an awful lot of car journeys or air miles.  If all farmers around the world were to farm in a similar manner, there is the potential to offset all the global carbon emissions created by global transport, which is about 30% of the carbon dioxide emitted. Or another way of looking at it, by increasing soil organic matter content from 1.7% to 5.2% on agricultural land globally, would take 1 trillion tons (0.9 trillion tonnes) of carbon dioxide out of the atmosphere, bringing it down to pre-industrial levels.

The good news is that we are not the only people practicing some fantastic sustainable farming techniques growing quality crops, livestock and wildlife habitats on our farm. As well as pressing rapeseed grown on our farm, we buy seed off four other LEAF Marque farmers who are just as passionate as we are in the way they farm. So, between us we are all doing our bit to preserve and protect the planet for future generations.

Further reading, in no particular order:

Montgomery. D.A, 2017. Growing a Revolution, Bringing our soil back to life. (Available from Amazon here.)

We have always firmly believed that a hard day’s work deserves a fair day’s pay. Our team works ...

This year has been hard for everyone in many different ways, so as a business we have tried to help ...