Bottom Farm is an arable farm, in other words, we grow crops and not animals. However, when giving talks on sustainable agriculture, I sometimes say that we do have livestock on Bottom Farm in the form of worms, pollinating insects, beetles and a whole host of other beneficial little creepy crawlies that help me grow my crops. They help by recycling old plant debris to create plant food for the growing crops in the case of worms; or pollinating our rapeseed and beans in the case of pollinating insects; or indeed helping with my pest control, in the case of the beetles that eat unwanted aphids on the crops. But in the more traditional sense, we don’t usually have livestock on the farm.

Before planting a spring crop of say, barley, I plant a cover crop in the autumn. A cover crop does just as it says, it covers the ground, protecting the soil from winter rains. By growing a crop throughout the winter months means the growing roots are holding onto precious minerals rather than being washed away in the rainfall. The roots also keep the soil in good structural condition, keeping it lovely and friable for the following spring crop. Finally, the growing crops provide a food source for all those little creepy crawly animals and bacteria in the soil that work altogether to make a healthy fertile soil.

I have tried several different crops over the years and currently favour a mixture of crop species, this includes oats, vetch, phacelia and buckwheat for example, each adding their own little bit of magic to the mix. Generally, I plant the cover crops in August or September and allow them to grow until January or February. As soon as the weather conditions allow, we will apply a herbicide to the crop to kill it off, giving it time to die and breakdown in readiness for the spring barley to be planted in March or April. By giving time for the crop to breakdown, all the bugs in the soil will start converting some of the plant material into nutrition ready for the new planted barley to feed on and grow healthily into a crop to be harvested. 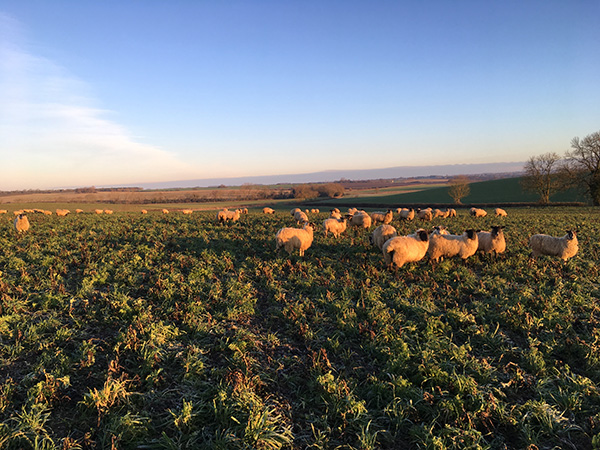 However, let’s return to the topic of livestock on Bottom Farm! Over the last few years, on some of the cover crop fields I have used sheep to graze off the vegetation in readiness to plant the following crop. This traditional method of destroying the cover crop is sometimes called the ‘golden hoof’, as the sheep not only remove the crop, but in the process, convert it into a fresh source of manure, thereby fertilising the soil. The sheep are not mine, but belong to a local farmer who takes them from farm to farm, where he gets good quality grazing for his flock, whilst providing us with an excellent lawnmower and fertiliser service. It does mean for a few weeks a year, I become a livestock farmer and we have sheep on Bottom Farm. I thoroughly enjoy walking the field every morning to check they are all still there and happily grazing. You could say it makes me feel like a real farmer, using traditional methods in our very modern world.

You can learn more about our sustainable farming practises here.

On the 8th August, we took part in 24 Hours in Farming, the agricultural industry’s biggest online...