We’ve all been affected by the pandemic in some way. At Farrington Oils, most of our office is now working from home, which has allowed our production team and core office staff to remain on the farm producing food for you, safely.

We know how difficult it has been to be isolated from our friends and families. We have found, however, that food and cooking has bought us together, from afar. We’ve loved trying new recipes and sharing hints and tips with our followers, but we wanted to do more. So we set up a giveaway of 20 Mellow Yellow gift sets. We asked our followers on social media to nominate a friend, family member or neighbour that they missed sharing a meal with to receive one of these gift sets.

We were overwhelmed by the incredible nominations we received. Hundreds of heartfelt messages about key workers, missed family members and friends and those going out of their way to support others. We randomly selected 20 winners and sent a Mellow Yellow gift set to their nominee. After reading all the amazing nominations, we wanted to share some all the amazing winner’s stories.

Here are our winning isolation nominations… 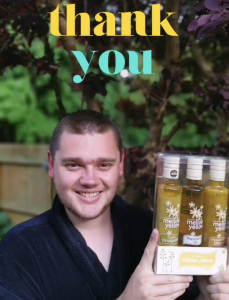 We hope everyone is continuing to stay safe and we look forward to being able to share meals with our loved ones again soon!

On Tuesday 25th June, we welcomed almost 400 people to Bottom Farm, the home of Farrington’s Mello...

Can you cook with cold pressed rapeseed oil?

Can you cook with cold pressed rapeseed oil? We get asked this question quite a lot, and the answer ...