Neonicotinoids insecticides hit the headlines because their use for controlling cabbage stem flea beetle in crops of rapeseed and the suspected links to declining numbers of honeybees and native bumble bees. At Farrington’s we have more questions from our valued customers about this, than any other topic. Before I go any further, just to confirm we are growing bee friendly rapeseed, we do not use Neonicotinoids in growing our rapeseed and do not intend to if the ban is lifted.

How we grow our crops and look after the wider environment has always been my top priority at Bottom Farm. Indeed, I joined LEAF (Linking Environment and Farming) back in 1997 to learn more about doing the right thing in this area.

Why is Cabbage Stem Flea Beetle such a problem?

Rapeseed plants grow from the tiny little black seeds planted at the end of August each year. The first few weeks are vital in the survival of the crop, which requires a warm, moist soil to help it germinate and tentatively put its head above the surface, from which the tender young plants start to grow. However, these young tender plants are delicious to a number of predators including flea beetles. So much so that if the conditions are right for flea beetles, they can completely wipe out a crop overnight. After which it is often too late to replant a second crop of rapeseed, as the soil temperature has dropped below the minimum required for the plant to grow. 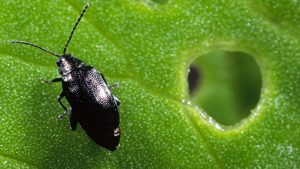 What is a Neonicotinoid?

Neonicotinoids are a group of insecticides based on nicotine. In rapeseed, the chemical is coated in tiny amounts onto the seed to be planted and moves (is translocated) into the growing plant as it emerges from the soil. When a flea beetle nibbles on said plant, there is just enough of the toxic chemical to kill the pest. But otherwise, it is a specifically targeted use of an insecticide in an ingenious way.

Concerns grew that numbers of both honey bees and bumble bees were declining, so scientists explored the potential causes. It appears there are several possible causes including; loss of habitat for bees to feed on and live in; potential pests and diseases affecting bees, such as Varroa mite; changing weather patterns, such as cool damp springs; use of agricultural pesticides.

Some research suggested that small amounts of Neonicotinoid translocated through to the pollen and nectar in the flowering rapeseed plants. When bees visited these flowers they were inadvertently ingesting the chemical which was causing them to lose their bearings; a bit like us trying to find our way home after having too much of a good night in the pub. Other research suggested longer term damage to the fertility of the bee colony.

Although research appeared inconclusive with the debate on both sides being passionate, the EU restricted the use of Neonicotinoids on rapeseed crops from 2013, until such time that more conclusive evidence is shown.

I use several approaches to try and grow a successful crop of rapeseed whilst looking after our bee populations.

– I use a crop rotation and have extended the rapeseed from one in 3 years, to one in 4 to 5 years. This will provide a bigger gap between the crop so as there is less food around for the flea beetle to live off, that will hopefully in time reduce the risk of attack. 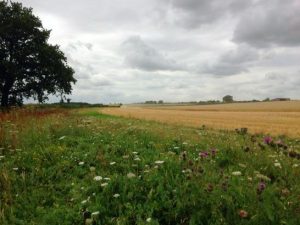 – Established wildflower meadow areas around the farm to create a perfect habitat with a variety of pollinating plants for bees and other beneficial insects to live off.

– Planting the crop into fertile soil, with the use of a healthy crop rotation which includes nutrient building cover crops to give the rapeseed the best possible chance to grow quickly out of the danger period when it is susceptible to flea beetle damage. This is backed up with a small amount of fertiliser if required.

– A local beekeeper has hives on the farm. The bees help fertilise our rapeseed and other crops, making delicious honey in the process.

– I am experimenting by growing companion crops of vetch and clover within the rapeseed. These create a friable soil structure and add nutrition to help the rapeseed plant grow well. It may also confuse a passing flea beetle as to what crop is actually growing in the field and may pass by unaware that their favourite meal is below them.

– As a final resort, we use an insecticide as found in head lice shampoo to kill bad infestations of flea beetle. If we use this, we make sure we spray the crop early in the morning or late at night, as the flea beetle will still be feeding on the crop, but the bees are all tucked up in bed.

In Summary, this hopefully explains some of the conundrums I have as a farmer in trying to do the best thing. Hopefully also, as I write in December 2016, with a temperature of -4.5°C this morning, I am confident that nature will help us enormously in reducing the number of flea beetles surviving the winter.