The rapeseed crop has been grown in Britain for a number of centuries, in fact, it was first introduced to the UK by the Romans. Rapeseed is a brassica and is related to such plants as the cabbage, mustard and turnip for example. Rapeseed became a popular crop in the UK from the 1970’s, as farmers were encouraged to grow it due to increasing demand for a refined British rapeseed oil by food manufacturers, as an alternative to other imported refined oils. The oil also became popular in Canada and the USA and became known as canola oil.

Rapeseed continued to be used purely as a refined oil until 2005, when Duncan Farrington became the UK’s first seed-to-bottle producer of cold pressed rapeseed oil. After studying the oil as part of his degree, he was fascinated by the health and culinary benefits when it was cold pressed. So, in 2005 he set up a small press on his family farm and started cold pressing the rapeseed grown in his fields. The oil was a huge success and British cold pressed rapeseed oil is now a store cupboard staple for many households up and down the country. 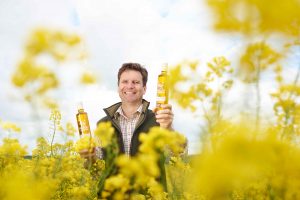 – A rich source of vitamin E

We are so proud to produce British rapeseed oil. As we grow, press and bottle our Mellow Yellow oil on our farm in Northamptonshire, it is truly British. Normally planted in August, a rapeseed crop is incredibly difficult to establish as it needs perfect conditions for it to survive the first couple months as it emerges through the soil. To ensure success the crop requires a combination of good soil nutrition and structure; moisture in the soil (but not too much); warm soils, ideally over 9°C; no pests, especially Cabbage Flea Beetles and Slugs, both of which find newly emerged tender leaves incredibly delicious and can decimate a crop in a matter of days. Later in the winter months, pigeons also enjoy eating the leaves which we try to stop with bird-scarers.

If the farmer’s skill, along with a bit of mother nature’s help get the crop through to the spring, then rapeseed starts looking after itself as the days lengthen and the weather warms. From late February onwards it starts waking up and literally grows before your eyes, going from a small cabbage like plant to something over a metre tall in a matter of weeks. By April the crop starts flowering, giving the countryside the recognisable yellow fields. The flowers are pollinated by native bumble bees, to produce the tiny black seeds ready to harvest some eleven months after the crop was first planted.

As well as the weather affecting the growth of the rapeseed crop, weather conditions at harvest time also affects the quality of the finished oil. Ideally the seeds need to be harvested in cool dry conditions, as moist warm conditions will spoil the crop and encourage the growth of moulds. Once harvested, the seed is stored with the moisture and temperature carefully controlled to ensure the seed is keep in the best possible condition, ready to be cold pressed to make a deliciously healthy, quality British rapeseed oil. 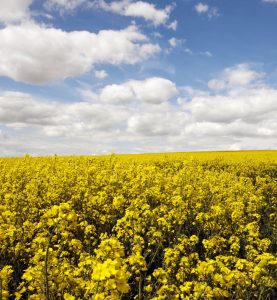 Where to buy British Rapeseed Oil

Farrington’s Mellow Yellow Rapeseed Oil is available nationally from Booths, Morrisons, Ocado, Sainsbury’s, Waitrose and many independent farm shops and delis. In order to find your local stockist, visit our Where to Buy page and just enter your postcode.